The Illusion Of Sex

The illusion of sex

© 2009 Richard Russell
In the Illusion of Sex, two faces are perceived as male and female. However, both faces are actually versions of the same androgynous face. One face was created by increasing the contrast of the androgynous face, while the other face was created by decreasing the contrast. The face with more contrast is perceived as female, while the face with less contrast is perceived as male. The Illusion of Sex demonstrates that contrast is an important cue for perceiving the sex of a face, with greater contrast appearing feminine, and lesser contrast appearing masculine.
Russell, R. (2009) A sex difference in facial pigmentation and its exaggeration by cosmetics. Perception,

Stayceyann Chin "Feminist or a Womanist" (transcribed) -- "Sometimes she is a he, trapped by the limitations of our imaginations."

"Feminist Or Womanist" by Staceyann Chin is one of my all time favorite things that inspire me. I transcribed her words below the video. If you see any mistakes, let me know.

Am I a feminist or a womanist? The student needs to know if I do men occasionally and primarily, am I a lesbian? Tongue tied up in my cheek, I attempt to respond with some honesty. Well, this business of Dykes and Dykery, I tell her, it's often messy.  With social tensions as they are, you never quite know what you're getting.
Girls who are only straight at night, hardcore butches be sporting dresses between 9 & 6 every day.  Sometimes she is a he, trapped by the limitations of our imaginations. Primarily, I tell her, I am concerned about young women who are raped on college campuses, in bars, after poetry readings like this one, in bars. Bruised lip and broken heart, you will forgive her if she does not come forward with the truth immediately, for when she does, it is she who will stand trial as damaged goods. Everyone will say she asked for it, dressed as she was, she must have wanted it. The words will knock about in her head: " Harlot, slut, tease, loose woman" - some people can not handle a woman on the loose. You know those women in pinstriped shirts and silk ties, You know those women in blood-red stiletto heels and short skirts. These women make New York City the most interesting place. And while we're on the subject of diversity, Asia is not one big race, and there's not one big country called 'The Islands', and no, I am not from there.
There are a hundred ways to slip between the cracks of our not so credible cultural assumptions about race and religion. Most people are suprised that my father is Chinese. Like there's some kind of preconditioned look for the half-Chinese, lesbian poet who used to be Catholic, but now believes in dreams.
Let's get real sister-boy in the double-x hooded sweatshirt. That blonde-haired, blue-eyed Jesus in the Vatican ain't right. That motherfucker was Jewish, not white. Christ was a middle-eastern rasta man who ate grapes in the company of prostitutes and he drank wine more than he drank water. Born of the spirit, the disciples loved him in the flesh.
But the discourse is not on those of us who identify as gay or lesbian or even straight. The state needs us to be either a clear left or right. Those in the middle get caught in the cross - fire away at the other side. If you are not for us, then you must be against us. If you are not for us, then you must be against us. People get scared enough, they pick a team. Be it for Buddha or Krishna or Christ, I believe God is that place between belief and what you name it. I believe holy is what you do when there is nothing between your actions and the truth.
The truth is I'm afraid to draw your black lines around me, I'm not always pale in the middle, I come in too many flavors for one fucking spoon. I am never one thing or the other.  At night I am everything I fear, tears and sorrows, black windows and muffled screams. In the morning, I am all I ever want to be: rain and laughter, bare footprints and invisible seams, always without breath or definition. I claim every single dawn, for yesterday is simply what I was, and tomorrow even that will be gone. 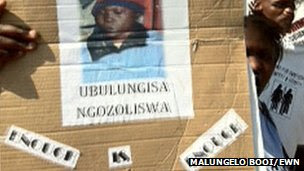 The four men were convicted of Zoliswa Nkonyana's killing in October last year
Four South African men have been sentenced to 18 years in jail for stabbing and stoning to death 19-year-old lesbian Zoliswa Nkonyana in 2006.
The court found that the men killed Ms Nkonyana because she was living openly as a lesbian.
A crowd outside the court in Khayelitsha, a Cape Town township, cheered and danced at the sentencing.
The constitution protects people on the grounds of sexual orientation - but homophobia is widespread.
The BBC's Pumza Fihlani in Johannesburg says the sentence handed out in the Nkonyana case is highly significant - both because of its length and the fact that the magistrate concluded that Ms Nkonyana was killed for being a lesbian.
For years activists have been calling on the state to be tougher on people who kill or attack people because of their sexual orientation - and they want the state to recognize hate crimes against lesbians, she says. [full story at BBC News Africa]

Below is some backstory from a post I made years ago on my other blog.
The Care2 petition is over but take a look at the support it garnered. 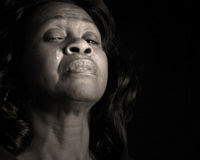 Gangs of South African men are raping lesbians in the belief it will "cure" the women's sexual orientation, an aid agency said on Friday. NGO ActionAid said in a report titled Hate Crimes: the rise of corrective rape in South Africa lesbians were increasingly at risk of rape, particularly in South African townships where homosexuality is largely taboo. South Africa has one of the world's most progressive Constitutions and became the first country in Africa to allow gay marriage in 2006, but homosexuality is still widely frowned upon and same-sex unions are often decried as "un-African". The brutal rape and murder last year of female soccer player Eudy Simelane, a lesbian, threw a spotlight on homophobic violence, particularly toward women. Thirty-one lesbians have been reported murdered in homophobic attacks since 1998, but support groups say the actual number is probably much higher because crimes on the basis of sexual orientation are not recognised in the South African criminal justice system, ActionAid said.

Source: mg.co.za
Last month I did a post on corrective rape in Africa. I just recieved this in my email, so please go check it out and make your voice heard.

Target: South African Presidnet Kgalema Motlanthe Sponsored by: Care2 A new ActionAid report describes the shocking rise of "corrective" rape in South Africa - in which South African lesbians are being raped in an effort to "cure" them of their sexual orientation. Support groups in Cape Town say they see 10 new cases of "corrective" rape every week. And it's even more widespread around the rest of the country. Many perpetrators of rape already go unpunished in South Africa, but the situation is even worse for lesbian women. Indeed, 31 lesbian women have been murdered in homophobic attacks since 1998, but in only one of these cases has there been a conviction. sign the petition >>>

(powa.co.za)
Women
(i) 1 in 2 women have a chance of being raped in their lifetime
(II) A woman is raped every 26 seconds in South Africa
(III) More than 40% of perpetrators are known to the rape survivor.
(IV) Less than 2% of reported rapes are false
(V) Most rapes occur within the rapists community
(VI) 1 in 4 women are in an abusive relationship
(VII) A woman is killed every 6 days by her intimate male partner in South Africa.
(VIII) Women are more likely to be attacked by someone they know than by a stranger
The Rapist
1. A Jhb (Johannesburg) survey revealed that: 1 in 4 men had raped a woman.
2. 85% of rapists were armed (usually with a knife)
3. 85 of rapes are gang rapes: A woman is more likely to be raped by 3 to 30 men than a single rapist
4. For every 400 rapes reported last year- 17 became official cases, 1 perpetrator was convicted and for every perpetrator convicted, 1 case docket was lost/sold.
5. In 1998 just under 7% of reported rapes were prosecuted.
Children
1. A child is abused every 8 minutes in SA
2. A child is raped every 24 minutes in SA
3. A child is assaulted every 14 minutes in SA
4. 85-90% of perpetrators are known to the child.
5. 1 in 4 girls & 1 in 5 boys under 16 yrs have been sexually abused.
6. 1/2 of 26 000 Jhb (Johannesburg) high school students interviewed believe that forced sex is not sexual violence.
7. In one SA township- all girls (mean age 16.4 yrs) had had sexual intercourse. 1/3 said their 1st experience was rape or forced sex. 2/3 teens said they’d experienced sex against their will.
8.The rape graph rises sharply from 3 to 25 year old girls and peaks at girls age 8 to 11 years.
HIV/AIDS & Violence against Women & Children
1. 40% of young men aged 20-29 (most common age of rapists) are infected with HIV/AIDS.
2. The incidence of HIV is highest in girls aged 15 to 25 years.
3. There are 1700 new cases of HIV infection daily in South africa.
4. Last year 20% of girls aged 13 to 19 were infected with HIV (six times more than boys).
5. 16% of Women raped are already infected with HIV (POWA is seeing higher percentages).
6. Approximately 1/3 of Women raped who do not receive anti-retroviral drugs will become HIV+
7. 1 in 3 children admitted to hospital are infected with HIV in South Africa.

Portraits and narratives of ten transgendered Africans from seven countries in East and Southern Africa by Gabrielle Le Roux in partnership with IGLHRC exhibited for the first time by Amnesty International – Amsterdam.
Zimbabwe: Amanda