Personally, I wish the Canadian Gov't WOULD stop the proles from trading Hollywood entertainment media crap via peer to peer, but that would involve revoking some basic rights... as far as people trading their music and art, the Gov't can fuck off - and die.

Why 'Occupy' Action Will Never Work

I don't really like to pee on the parade, but the 'Occupy Movement' only serves to show the current strength of the 'mob' resistance to the state (corporate). Not to say that 'Occupy' is worthless - it has held a mirror to the resistance body itself, and that is giving hope to many people. Is hope a good thing? That is a big question. It depends on what kind of hope it is.

Hope can merely be something that helps people sleep at night. In the case of 'Occupy', a lot of armchair resist folks feel camaraderie which is actually kind of damaging in the way in that they may never become mobilized. On the other hand, it is a true shot in the arm for those who have resisted authentically for however long.

The reason I have posted this video on 'psychopaths' is because the resistance leaders need to know that they are dealing with this kind of mentality. If they were fully aware, the strategy would obviously have to change. That says that the resistance has a lot to learn.

If the resistance were fully armed with techs and organized, for example: attacks on let's say Rothschild's networks would be occurring. The battle of the best would be happening already, but it isn't. This is only the stuff of Hollywood movies. The 'anonymous' threat is what it is. Is someone somewhere fully capable of taking down systems in the corporate structure, thereby wounding their abilities and cutting the flow of capital to their coffers? If it is, why are they waiting? Or do the Rothschilds of the world simply scan the planet, go to defcon etc., and scoop every worthy hacker that exists. Either join us or disappear. Simple.

Is this conspiracy thinking? Watch the video, learn a bit about the enemy.

I have first hand experience with the psychopathic nature - I have watched it in action, and watched it evolve over many years. Sure, as they say at the beginning of this video, everyone has come in contact; sure they say everyone can recognize a psychopath etc., but if you don't get into bed with your enemy, if you don't know how they taste, smell, breath and quiver, you are still outside the gates and likely will never come close to making a strike. So... let's stop fooling ourselves: compared to a 'normal' person, to regular folks, these people are alien monsters who will eat your children.

Get to know them a little, forget your friends, get close with these guys... just don't let them see you watching. Once they lock on you, well, you just better be ready.

The video below is a good short intro to the psychopath mentality in the social world - and the advice at the end is very practical for day to day interactions with these people in society.


The video is audio only after the intro - part two plays auto after the first one ends:


A contact sheet strip of photos taken in London, UK.

Getting Beyond The Label

I recently re-joined Susan's Place - http://www.susans.org
If you haven't already, you can find a large resource of trans related info and an extensive forum.  I get tired of things easily that aren't integrally important to me, which covers a lot, hence the leaving and returning. I see that the age average at the forums (at least among the recurring posters) must be below thirty and perhaps pushing even towards 25. So it goes.

I tend to be a ravenous study when it comes to digital information - when I sus out people I check all their stuff they've posted, check their websites, creative info etc. If I want I spend more time and sometimes comment and connect etc. BTW I'm not a sociopath or lurker of any kind - I'm definitely not that interested in people's natures - I am however a studier of sociopathology which is entirely another subject. The thing is, I am quintessential with my online research. I crossed the boundary of end user on the web when I first came in contact with http in the mid nineties. In fact the actual event that struck me, branded me to the beyond end user status was when I made my first ftp connection and uploaded a web page. That was it - it was like the first time I saw a print come up in a developer tray... nuther story again.

Anyway, that all being said - I believe that youth on Susan's and in many places on the web tend to miss essential truths, which is a comment in itself. Here is a few words by a poster on Susan's who like myself, being a little older, had a few important words to say. It was on a busy thread and no one paid notice or commented. I think that her words bear repeating, in fact I made a jpeg and for now it sits on my desktop as a reminder... Here it is.

On another note: I had great fortune yesterday - I scored two pairs of boots at Wallyworld for a combined total of under fifty bux, and in the mall as well - a Kobo Touch for $119 (20 bux off). I find the Kobo to be excellent for what it is - I have no interest in a multipurpose tablet of any kind - I just wanted a decent ereader which this is. I also began reformatting some epub books I have that were formatted with 0 margin width. It's pretty easy, and I'm sure I'll be offering to compile ebooks for writers soon. (besides making my own). I also took delivery on a new scanner yesterday - an Epson V600 which scans negatives as well. I researched a lot over the last few years waiting for just the right thing.  So, I'm a pretty happy gal. 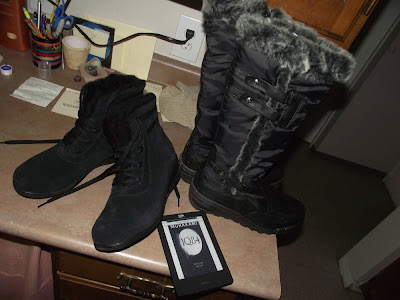